ROHM has recently announced the development and mass production of an SiC MOSFET that adopts the world's first trench structure. Compared to existing planar-type SiC MOSFETs, ON resistance is reduced by 50% in the same chip size, making it possible to significantly decrease power loss in a variety of equipment, from industrial inverters and power supplies to power conditioners for solar power systems.

In recent years the demand for measures against power supply issues on a global scale has brought increased attention to power supply conversion and the efficient delivery of generated power. SiC power devices are expected to play a major role as key solutions that dramatically reduce loss during power conversion. ROHM, a pioneer in SiC development, was the first supplier to successfully mass produce SiC MOSFETs in 2010 and continues to lead the industry in developing products that achieve further reductions in power loss.

As the performance and characteristics of silicon approach their theoretical limits, ROHM from early on has focused on SiC as a viable successor to silicon as a semiconductor material due to its higher voltage resistance and lower loss (higher efficiency). ROHM's latest offering, an SiC MOSFET featuring a trench structure that maximizes SiC characteristics, represents a groundbreaking milestone with significant implications worldwide. Optimum performance is achieved by combining exceedingly low loss with high-speed switching performance. As a result, efficiency during power conversion is improved and waste eliminated during production, contributing to increased miniaturization, lighter weight, and greater energy savings in a variety of equipment. And going forward ROHM is developing full SiC modules that integrate both SiC MOSFETs and SBDs. 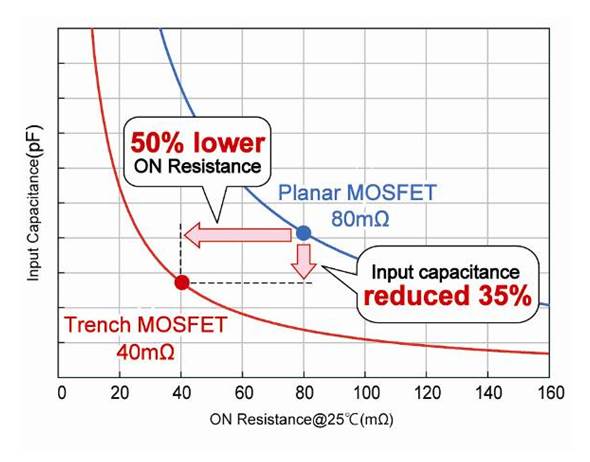 Although adopting a trench construction in SiC MOSFETs has been attracting increased attention due to its effectiveness in reducing ON resistance, there is a need to establish a structure for mitigating the electric field generated in the trench gate portion in order to guarantee long-term reliability.

ROHM was able to meet this need and successfully mass-produce the industry's first trench-type SiC MOSFETs by utilizing a proprietary structure. As a result, switching performance is improved (approx. 35% lower input capacitance) and ON resistance reduced by 50% over planar-type SiC MOSFETs. ROHM has also developed a full SiC power module that incorporates these latest trench-type SiC MOSFETs in a 2-in-1 circuit with integrated SiC SBDs. In addition, the 1200V/180A module features the same rated current as Si IGBT modules while reducing switching loss by approximately 42% vs. planar-type SiC MOSFETs.

A design - most commonly used in FETs - often adopted as a switching element.

Refers to a type of structure wherein a MOSFET gate is formed on the sidewall of a groove created on the chip surface. Unlike planar-type MOSFETs, JFET resistance does not exist, making greater miniaturization possible. This is expected to result in ON resistance close to the performance of the original SiC material.